At 1.45 p.m. on June 25, Surgeon-Lieutenant Tom Patey, Royal Navy, and I stood on the summit of the 25,550-ft. high Himalayan giant, Rakaposhi. A fierce blizzard was raging and we did not linger. The story of how we got there is not only a mountaineering tale but it is also a story of Commonwealth cooperation in planning and teamwork in execution. It is, in fact, the story of the British-Pakistani Forces Himalayan Expedition, 1958.

The expedition was conceived as a small but exacting experiment in international and inter-service co-operation. All the members were service officers and were drawn fairly equally from the Pakistan Army and the British Navy, Marines, Army and Air Force, making a total of nine climbers. Field-Marshal Sir Gerald W. R. Templer, G.C.B., G.C.M.G., K.B.E., D.S.O., Chief of the Imperial General Staff, and General Mohammad Ayub Khan, Commander-in-Chief of the Pakistan Army, lent their powerful support as joint Patrons; and the expedition committee was, appropriately, presided over by Major-General J. L. Moulton, C.B., D.S.O., O.B.E., Chief of Amphibious Warfare, and an officer of the Royal Marines.

The Pakistani members now joined the team. From the Punjab Regiment came Captain Raja Mohammad Aslam, a strapping officer of six foot three. Waiting for us at the hill-station of Gilgit was Captain Shah Khan, of the Northern Scouts. We were particularly pleased that he was to join us because he came from the same district as our Hunza high-altitude porters and was in fact the uncle of the Mir of Hunza. He would thus be able to understand and control the Hunzas with complete assurance. Finally a Pathan surveyor, Sahib Shah, joined us from the department of the Surveyor General of Pakistan. Sahib Shah was a veteran expedition surveyor who made himself immediately at home and showed an instinctive understanding of mountaineers' idiosyncracies.

Our objective was the ascent of Rakaposhi, one of the unclimbed giants of the Karakoram Range. Rakaposhi has a long mountaineering history, closely associated with British climbers. In the dawn of Himalayan mountaineering, in 1892, Martin Conway (later Lord Conway of Allington) penetrated the Bagrot nulla to the south of the peak. The lower ramparts deterred him but he pronounced the upper mountain climbable. The peak lay unmolested until 1938 when two British climbers, Secord and Vyvyan, approached Rakaposhi from the West. They investigated the peak via the N.W. ridge but only attained a height of about 19,700 ft.[1]. The first determined attempt, which had some chance of success, was spearheaded by the celebrated ‘Everester' H. W. Tilman in 1947.[2] He was eventually turned back at about 19,000 ft. both on the N.W. ridge and on the S.W. spur. He regarded neither route as promising. In 1954, two expeditions had designs on Rakaposhi. An Austro-German expedition under Rebitsch approached from the South but came to much the same conclusion as Conway had done sixty years earlier and they left the peak, dubbing it unclimbable from that direction as it most probably is. In the same season a Cambridge University expedition, under Tissi6res, and including Band who was on Everest in 1953 and was later to climb Kangchenjunga, again tried TilmanVs routes, Ihey discovered that the S.W. spur was the most hopeful line of approach and they reached about 20,800 ft. before their assault petered out through lack of impetus, The final 2,000 ft. of climbing had been up a great face of snow and ice called the Monk's Head. This was a most formidable obstacle, particularly for porters.3
In 1956, the British-American Karakoram Expedition came near to climbing Rakaposhi. I led this four-man expedition. We established two camps above the Monk's Head by our own efforts, the Hunzas having had enough after 19,000 ft. However, so much load-carrying was involved (we each carried three loads up the Monk's Head) that we had insufficient strength to force the upper part of the mountain above 23,000 ft., at which height our top camp was situated. We reached 23,500 ft. and had to turn back just when we thought the summit was within our grasp.4 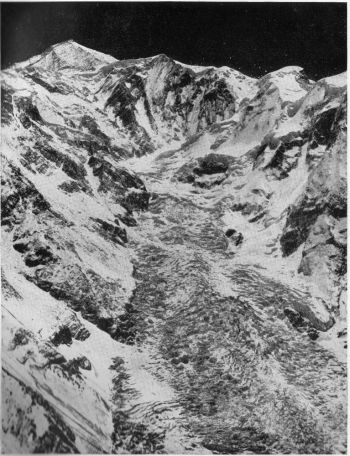 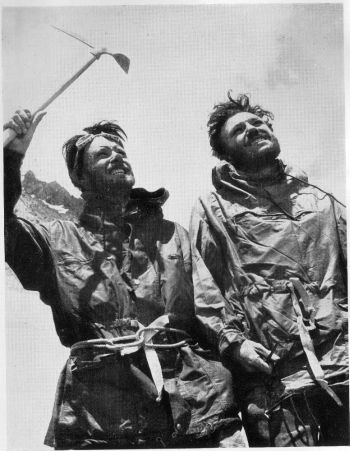 Back at base after the summit climb. Mike banks (left) and Tom Patey.

By 1958, therefore, Rakaposhi was one of the most-attempted peaks in the Himalayas which still remained unclimbed. Moreover, it had defeated some celebrated climbers in its time. One might call it the poor man's Everest.

General Buller, I think it was, who when asked how to win wars, growled: ' More men'. From my experience I felt that the remedy for Rakaposhi would also be more men: a heavyweight expedition which would have enough impetus to get to the top even if the porters defected low down. With nine climbers the British-Pakistani Forces Himalayan Expedition had sufficient punch behind it. I also resolved to place one camp higher than we had done in 1956, and that this top camp should be at about 24,000 ft. to bring the summit within 1,500 ft. This would be the more important as we were not using oxygen. It is current British mountaineering thought that oxygen is not necessary for peaks below 26,000 ft.

The expedition flew into Gilgit on May 11, the flight over the Himalayan foothills, and past the stupendous massif of Nanga Parbat, being as beautiful as it was frightening. Jeeps and aeroplanes have revolutionized travel in the Karakoram, so that within two days of leaving Gilgit we were within a day's march of Base Camp, our further progress blocked by deep winter snow impassable to coolies. We dallied for a week in a delightful pine forest and arrived at Base Camp, 14,000 ft., on May 20.

Our broad plan was to move cautiously to the foot of the Monk's Head, at 19,000 ft., stocking our camps well against any protracted storms, and placing fixed rope on difficult passages. In addition, we would rope the Monk's Head from top to bottom. In all, we used about four thousand feet of fixed rope on the mountain. Once we were established in strength below the Monk's Head, we would rush it, and the three giant steps above it which led to the summit.

We started our build-up in late May, much impeded by new snow falls with their attendant avalanches. Taking advantage of lulls between the storms, we steadily built up and stocked the first two camps up to a height of 19,000 ft. We kept to the well-proven practice of 'carry high, sleep low' and, in fact, retired to Base Camp when the weather was particularly bad. Even so, our two Pakistani officers together with six Hunzas were caugiit in a bad avalanche below Camp I which swept 1,500 ft. down the mountain. Mercifully no one was buried or badly hurt.

As the season advanced and the snow receded, we pushed on over a minor peak on the S.W. spur, nicknamed the Gendarme. This was a rock and snow spire of some 300 ft. which very ellcc lively barred our progress. The climb was led by John Sims who at times seemed rather to be swimming than climbing up the precipitous but deep new snow. As at every other danger point we placed fixed ropes for the benefit of the laden porters.

On June 14, Camp III was established at the foot of the Monk's Head. Richard Brooke, Tom Patey and Dicky Grant then climbed and roped this formidable snow and ice face from top to bottom. This considerable undertaking took two days. If the Hunza porters could be persuaded to climb the ropes it would be our highway to success. This persuasion we left in the very capable hands of Capt. Shah Khan.

On June 20, seven sahibs and five Hunza porters ascended the Monk's Head. This was an exhilarating day for we knew that the top of the Monk's Head, at 21,000 ft., would be our springboard to the summit. It was a great triumph to get the porters up this rampart, and the credit is entirely attributable to Shah Khan's influence and leadership. In fact it would be true to say that no expedition has got better or more loyal service from their Hunzas.

A blizzard beset us on the summit of the Monk's Head, Camp IV, and it was two days before we could tackle the first of the three giant steps, each of them about 1,500 ft.; which lay between us and the summit. On June 23, with Jimmy Mills, Warwick Deacock and John Sims acting as porters, four of us were able to establish Camp V at 23,000 ft. On the following day, Richard Brooke and Dicky Grant carried up a further thousand feet, to the top of the next step, and Tom Patey and I were safely installed in our assault camp, Camp VI, at 24,000 ft. The summit was clearly visible about 1,500 ft. above us and there appeared to be no intervening mountaineering difficulties. It looked as if it ought to be in the bag the next day.

Next day, or rather next dawn, a howling wind was half flattening our tiny two-man tent. Drifting snow was being hard-driven by the wind and we could hear the snow spatules drumming against the strained canvas. I put my head out through the sleeve entrance and quickly withdrew it.

' I've sledged in weather like this in Greenland. It's not too bad once you're outside,' I lied to Tom Patey.

So we put on every shred of clothing we had. I wore many layers of conventional clothing and a complete suit of down clothing. On our feet were specially designed vapour-barrier boots. In fact, I emerged from the tent almost hermetically sealed. It was just as well, for outside we were caught up in a regular tourmente. Our combined tussle against the altitude and the blizzard, aggravated by deep snow, slowed us down to a snail's pace. We were only ascending at about three hundred feet per hour, but going steadily. After what seemed an age, we crossed a wide snow basin and climbed the mountainside to a point where a ridge curled up to the summit. We had nearly made it, so I risked taking a dexedrin tablet. For an hour or so this made the slope less steep, the wind less nagging and my legs suddenly stronger. We reached the summit at 1.45 p.m. Great spumes of snow were being lashed into the air by the up-draught. I peeped over the summit to look down into the little state of Hunza which is shut off from the world by the walls of Rakaposhi. With so much driven snow flying about our heads the view was blurred but spectacular. A great rock wall swept down until it became lost in glacial ridges. We identified the sinuous Minapin glacier stretched out like a great white snake. Tom and I were both worried about the cold. His fingers had gone numb and so had some of my toes. So we did not linger but hurried down to our tent to take anti-frostbite pills and to drink cup after cup of sweet tea. 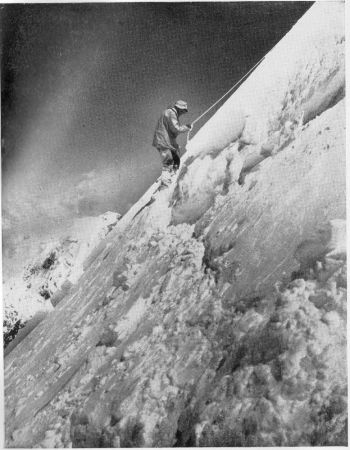 Tom Patey at the foot of the fixed ropes on the Monk’s head. 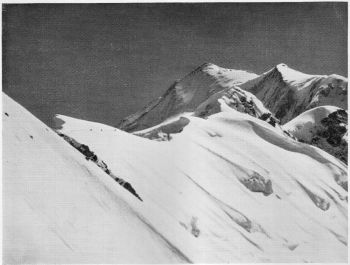 With the storm still at its height the next morning, we started our descent. At one stage we were lost in cloud and were pondering our chances of survival for the night in a shallow crevasse when the air cleared and we were able to orientate ourselves and join our friends at Camp IV, where they gave us a tremendous reception. In two days we reached Base, where Captain Raja Aslam had prepared a banquet to celebrate the twin events of our victory and the Id of Ibrahim or Qurban-the Muslim counterpart of Christmas.

The successful ascent of Rakaposhi was attributable to one predominating factor only-teamwork. British, Pakistani and Hunzas all worked together in complete harmony, making our little experiment in international and inter-service co-operation a resounding success. Tom Patey and I climbed to the summit on the shoulders of the team. And when we got there I must guiltily admit that both of us had forgotten to carry the little British and Pakistani flags we had so carefully procured!