Throughout the early surveys of the Himalaya and Karakoram during the last century surveyors were faced with the difficulty of finding names for the mountain features they explored and mapped. Except for rivers which frequently had several names along their courses, for valleys and passes, and for an occasional mountain looked upon as sacred, natives of the Himalaya rarely give names to features, and there must be hundreds of thousands of unnamed summits. During those early surveys, the Survey of India authorities, responsible for the mapping of the mountains, resolutely refused to allow their maps to be covered by personal and descriptive English names, a policy for which modern mountaineers ought to be profoundly thankful. Montgomerie's plan was to introduce a regional system for the Karakoram, designating the whole region by the letter 'K', and the individual summits K1, K2, K3, and so on. In other parts surveyors adopted other methods, some by their own initials followed by a number, such as T4S, R264, others by Roman figures, such as lxxix. Nevertheless, private travellers and explorers have on their own maps introduced descriptive or personal names, such as 'Broad Peak5, 'the Golden Throne', 'Mount Hawk’, 'Mount Hardinge', and so on, and these have been at variance with the accepted principles of the Survey of India and of the Government of India. Writing in 1906, Colonel Sir Sidney Burrard, f.r.s., then Superintendent of the Great Trigonometrical Survey of India, gave his views as follows:1 'The nomenclature of a mountain region should not be forced: it should grow spontaneously, and we should never invent a name until its absence has become inconvenient.'

That is a sound general principle, and it served well during the last century; but with the great increase in travel and exploration, both for pleasure and for scientific purposes, during the present century, the lack of accepted and official names has to-day become very inconvenient, and it has been felt for some time that some further guidance for geographers and mountaineers should be given by the authorities in this matter.

It was during my study of the literature of the Karakoram more than twenty years ago that I noted the growing inconsistency and confusion among travellers and writers regarding the names of even the larger features of the region, and on my return from my exploration in 1926 I called attention to this question and put forward certain tentative proposals to the Royal Geographical Society and to the Surveyor-General of India, Sir Edward Tandy. I devoted considerable time to collecting references from published sources, discussed the problem both personally and by letter with various explorers, travellers, and experts, and compiled a map of the whole region from Survey of India and other sources. Discussion showed that opinion was sharply divided on my proposals, and it became necessary, if general agreement was to be secured, to consider the whole problem afresh, in the light of the most recent surveys.

At that time we were mainly interested in the major divisions of the Karakoram mountains; but in the course of collecting material I made a large number of notes regarding the names of individual summits, intending to tackle this question at a later date. When, therefore, the Surveyor-General accepted the invitation of the Royal Geographical Society to be represented in London at a conference on the subject of Karakoram nomenclature, it seemed particularly convenient to bring up for discussion, not only the systematic naming of the main features of the region, but also the names of individual mountains. It seemed all the more appropriate to do so in view of the important letter circulated in 1936 by the Surveyor- General laying down the principles that would guide the authorities in India in future.3 I therefore drew up a detailed memorandum for discussion at the conference to be held during the winter of 1936-7, under the chairmanship of Colonel Sir Charles Close, f.r.s., at which the Survey of India was represented by Colonel C. G. Lewis.

This draft memorandum was exhaustively discussed point by point at a large number of informal meetings of members of the conference. As soon as the first general principles were agreed upon, the general approval of the Surveyor-General was sought and obtained. As work progressed, Colonel Lewis explained the proposals to Sir Sidney Burrard, who had taken so active an interest in the matter since it became acute some ten years before. Typed copies were sent to India for examination and criticism. By the time the conference met officially on the 23rd March 1937, the revised memorandum, which had been circulated for a last scruntiny, was practically in its final form. With a few minor amendments it was then set up in type and copies were circulated to those geographers and travellers known to be interested.

The proposals have met with general and generous approval. They were reported to the Council of the Royal Geographical Society and submitted to the Surveyor-General of India for sanction. They were examined closely in India and in a letter dated the 30th August 1937 the Surveyor-General gave his approval to them without qualification of any kind. Since then they have been published in the Geographical Journal, vol. xci, 1938, pp. 123-52. A number of letters have been received expressing satisfaction both with the Surveyor-General's letter of October 1936 and with the conclusions of the conference. Very occasionally some regret is expressed with the decision to drop some particular but previously unofficial name, such as 'Golden Throne', or some difference of opinion has been expressed regarding the application of a native name, on the grounds of faulty derivation or spelling.1 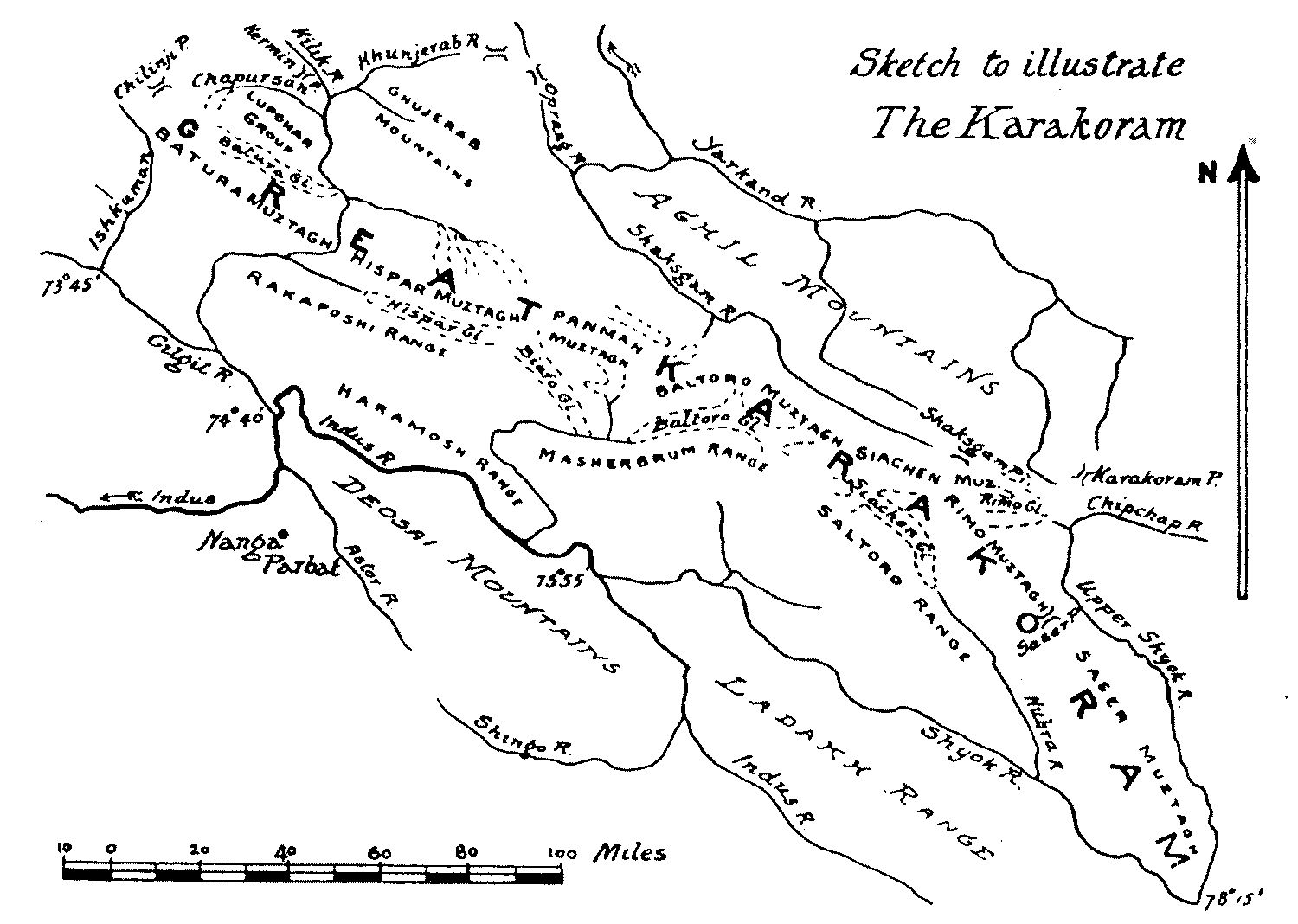 The general principles underlying the scheme have been to define and name the topographical features as they exist to-day and to avoid theorizing on their structure and origin. Much of the confusion that has arisen in recent years has been due to the introduction of conflicting theories of structure based on insufficient data. Once we had a comprehensive map showing not only the relief and topography clearly from the most recent surveys, but also such details as the ice and permanent snow, it became a problem of dividing the whole region into suitable geographical blocks, of sub-dividing these blocks into suitable groups and massifs, and then of searching for and agreeing upon the most suitable names. This meant a detailed study of the writings and maps of a large number of explorers and cartographers, and the settlement of a number of conflicting statements. The names of the larger divisions were first agreed upon. The name 'Karakoram', which had originally been extended from the pass of that name to the mountains by European geographers, was further extended to include the whole region to which subsequent travellers have applied it, while the term 'The Great Karakoram' was accepted for the great alinement of ice massifs that extends from one end of the region to the other. It was felt that the locally preferred name 'Muztagh', which also had considerable historical significance, could be suitably applied to the major divisions of the Great Karakoram. The muztaghs lent themselves to subdivision into groups, and the groups into massifs and individual peaks. It was felt that the term muztagh was inappropriate either linguistically or descriptively for the subdivisions of the lesser Karakoram, and, for want of a better term, they were called 'ranges'. ' I 'he muztaghs have been named in every instance but one from the 1 m cat glaciers which drain them; the ranges of the Lesser Karakoram from the most conspicuous mountain on their alinement.

The groups have been named from the best-known locally named feature, often a glacier, whenever possible from the most accessible side; tliere are a few exceptions, where it has been deemed advisable to retain some name that has long been associated with the group in existing literature, as, for instance, the Kanjut group. A few of the more important unnamed peaks have been named, either from their group-names, or from an accessible locality, with a suitable affix such as Sar, or Kangri, according to the language of the region, ,md according to local practice. A few of the recognized English names for the best-known and most prominent peaks have been retained, but only a very few. The names so retained from long usage are K2, the Muztagh Tower, and Broad Peak. The 'Hidden Peak’ of Conway has long been known in the records of the Survey of India as Gasherbrum I, and this official name is retained; it was known to and its height was determined by the Survey of India long before Conway saw it. The conspicuous unclimbed summit northeast of K2, inappropriately called 'Staircase' on unofficial maps of the past, has been named 'Skyang Kangri', from the glacier on its north. A number of other unofficial English names for peaks have been rejected; some of these peaks have been renamed, while the renaming of others has been left to subsequent travellers. All personal names have been discarded. Notes are given in the appendixes explaining the different questions involved. Regions which are or were inadequately mapped at the time of the conference have been left in outline for subsequent treatment.